First episode of Darkside Chronicles in 2009

08th of January 2009, I come to Your doors with talented deep house dj from Poland, Phil Jensky. 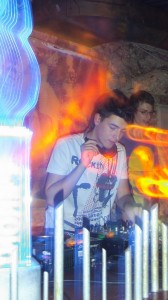 Some of Phils work You can find on his profile on MixNTrix site [click] or on his [MySpace].

Phil Jensky is a film and culture student in Cracow.He started his adventure behind the decks in the year 2005 in Rally Cafe where he learned his mixing craft from Q-Naro. Later on he became a co-organiser of a couple of music cycles which connected many music genres like house,trance,progressive. His music evolution started to blossom beginning with progressive-trance and ambient and gradually changed as he would later discover to other interesting sounds. Currently in his sets we can obviously see electro/tech-house/minimal/progressive flows. He doesn’t want to narrow himself down to one type of rythm.He thinks that a good music compilation is not only one that is harmonic and well put together, but one that brings a large amount of emotions. Later on, he was asked to make a set for www.mixing.hu, www.danceradio.gr and www.mixntrix.net. His Abstract 007 compilation for the Hungarian net page soon became the set of the month, over 3000 people downloaded the track. A year later he continued with the Abstract 016 set that scored a scary amount of 15.000 downloads. Under the sign of “Sunday Best” he performs together with Dj Ezzo in Frantic Club and twists up the atmosphere on sunday nights as a one of Frantic residents. He has already set foot and left a large print in all the best clubs in Cracow such as Bledne Kolo, Frantic, Midgard, Prozak, Cien, RDZA, Enzo, Enso, Zoom, Folia Concept and also in such cities in Poland as Warsaw (Piekarnia), Lublin (Obsesja), Katowice (Maska), Rybnik (Velvet Underground).In the summer 2007 he had the privilage to mix in 2 clubs in Edinburgh (Scotland): Opal Lounge and Ego Club. Not to mention he had a chance to perform in the Carling Leeds Festival 2007 in England. In his career he has mixed with Dj’s such as C-Jay (Iboga, Baroque Records|NL), Alex Miles (Bora Bora Ibiza|UK), Muttonheads (Serial|Fr), Marc Hughes (Ministry Of Sound|UK), Dom Chung (Ministry Of Sound|UK), Martin Doorly (Ministry Of Sound|UK), Nikolas Dee J (Allerot Resort|IT), Hanna Bernard, Ex-Or, SLG, Jolly Roger, Very, Lucjan, Insaneman, G-Sound, Doman Hilczer, Barillo, Blezz. Currently he’s organising parties “Strangers In The Night” and “Houseradio presents” in Cracow.